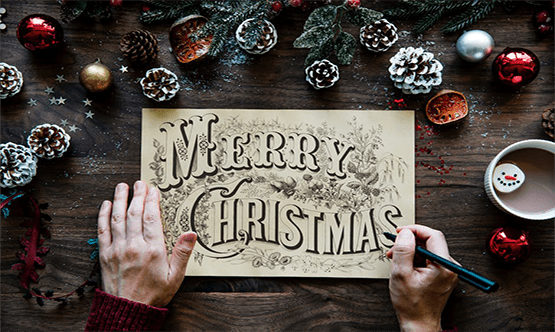 It’s that time of the year again!

People start to rush down the streets to get their perfect holiday gifts for their loved-ones. Avid online shoppers waiting for that once a year holiday sale to avoid the traffic jam and crowded streets.

With all these holiday crazes, it’s also the best time to post your coolest holiday campaigns on Facebook to catch everyone’s attention and avail your promising products.

The holiday season is a perfect time to market, so a well-thought campaign that fits the season is what you need to gain more customers. Holiday ads are everywhere, especially on Facebook, so don’t just blend with the sea of different brands’ campaigns but stand out.

#1 Sunnies Studios – Free shipping on everything

Sunnies Studios is not just a company that sells sunglasses but foremost a lifestyle brand. They are good at marketing their products and their latest holiday campaign is a good example of that.

In the ad example below, they combined two strong factors that really work together.

First, they chose to post an image of their latest endorser, Liza Soberano to promote their different style of eyewear instead of coming up with an edited picture of their brand collection.

Second, they highlighted their free shipping service and put the ‘Shop Now’ button. This way, it’ll be easier for their audience to go to their landing page and shop their products. 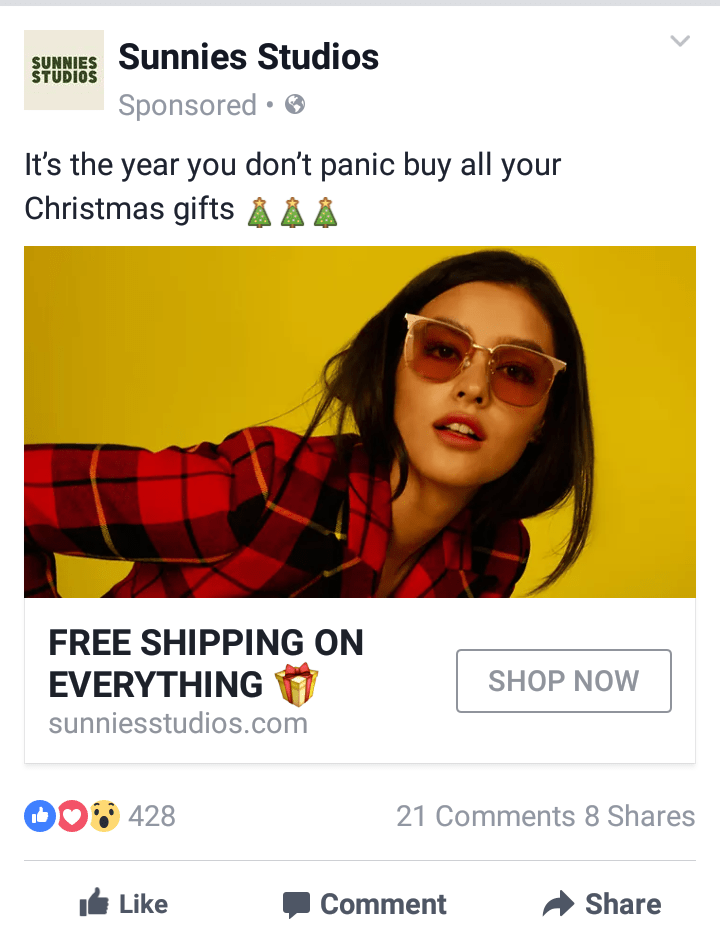 Philippine Airlines is also setting up the game this season. They want to target those audiences who want to have a holiday getaway before the year ends. They used a carousel-type ad to promote their campaigns. 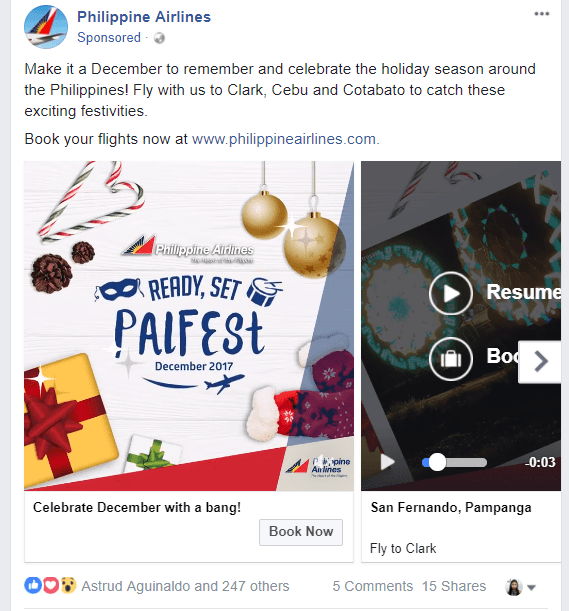 #3 McDonald’s – Our Christmas gift to you

Christmas parties are everywhere and McDonald’s didn’t pass the trend. This time they promote their hassle-free Christmas party packages.

Their call-to-action ‘See Menu’ button lets people see what they offer to a party. 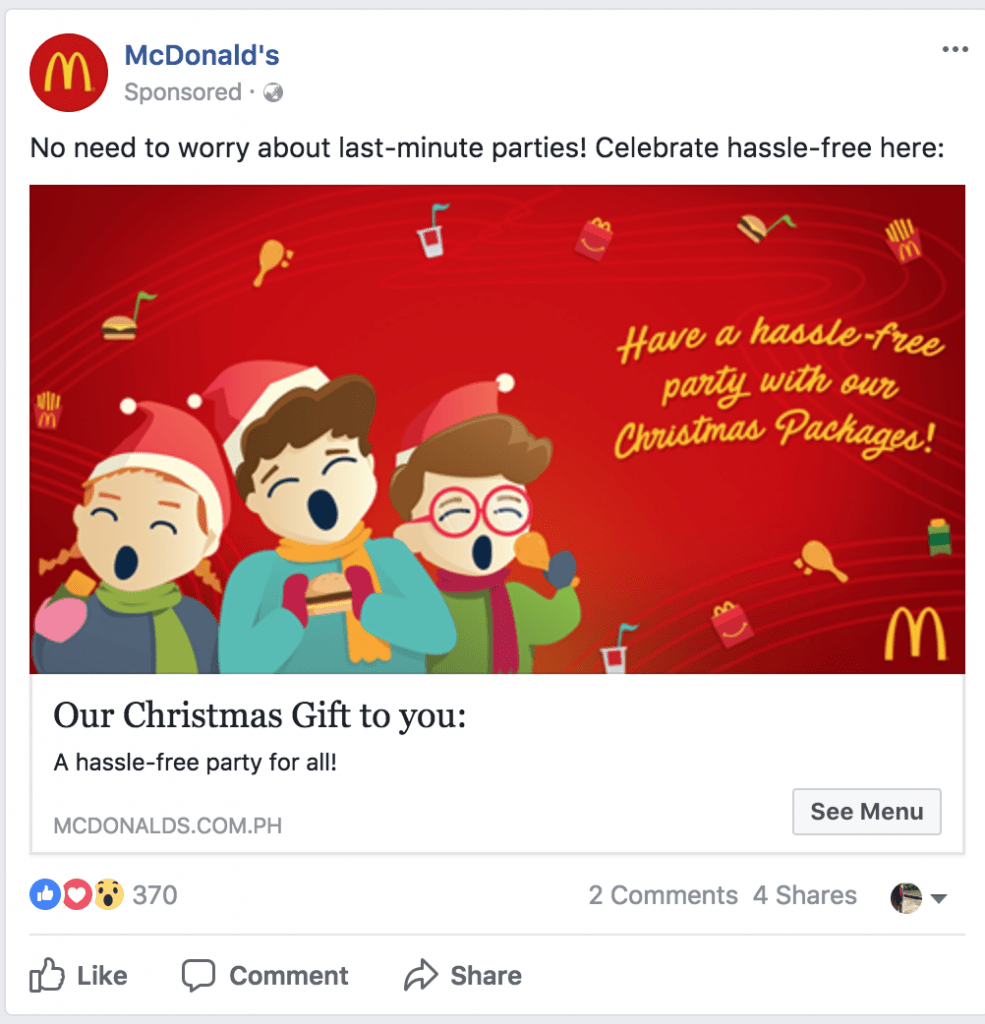 BeautyMNL’s holiday campaign wants to catch the attention of those Christmas shoppers by offering gift sets.

They used two call-to-action buttons – the ‘Like Page’ and ‘Shop Now’. 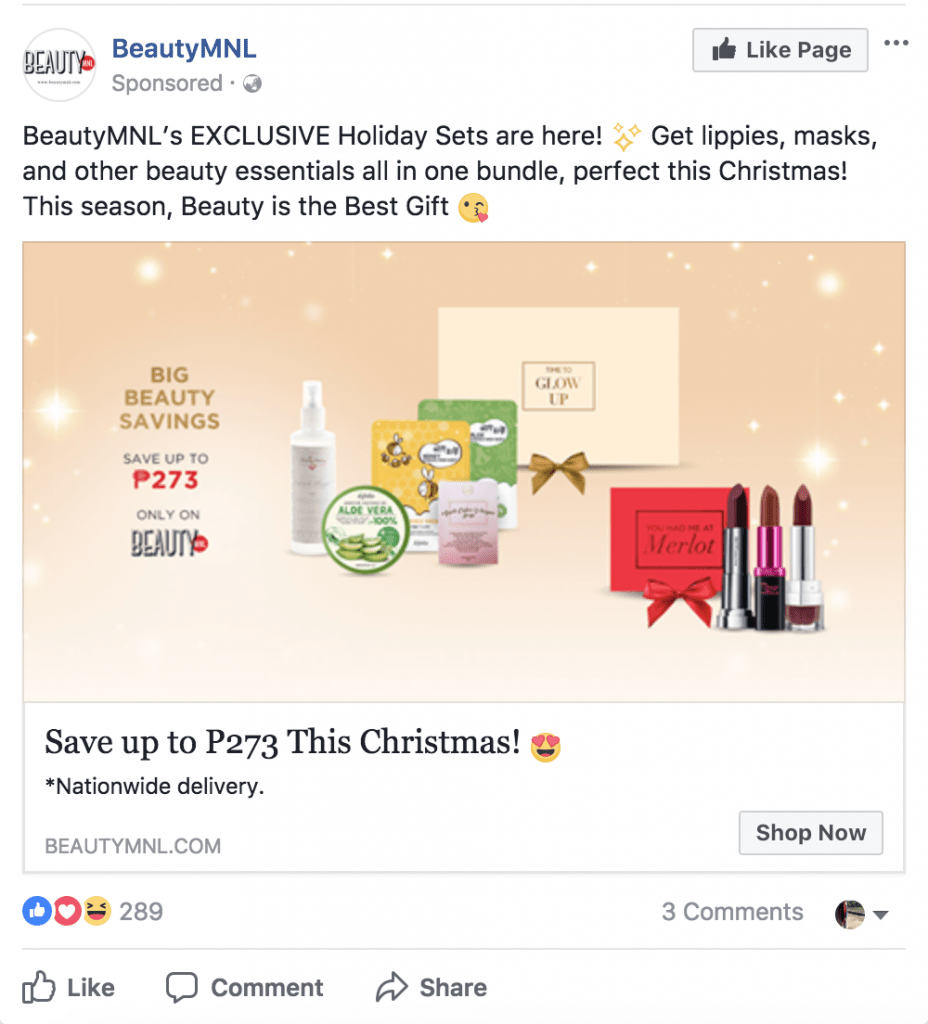 Shopee Philippines used a carousel type of ad to promote the different products they sell on their website.

There’s a sense of urgency in their ad (using the sale period). Since they encourage their target market to install the app, they used the ‘Install Now’ call-to-action button. 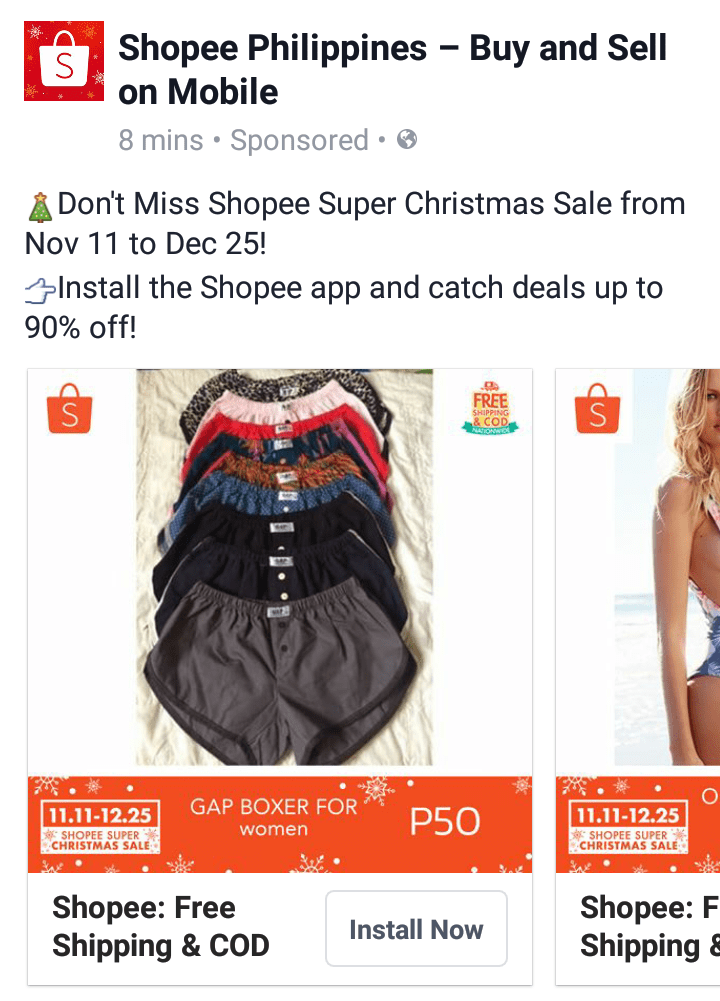 #6 Nestle Yogurt – Indulge without the guilt

Consumer Packed Goods (CPG) companies are one of the busiest companies that launch holiday campaigns.

Nestle is one of them.

The message on the ad is simple yet straightforward. The colors are eye-catching too. 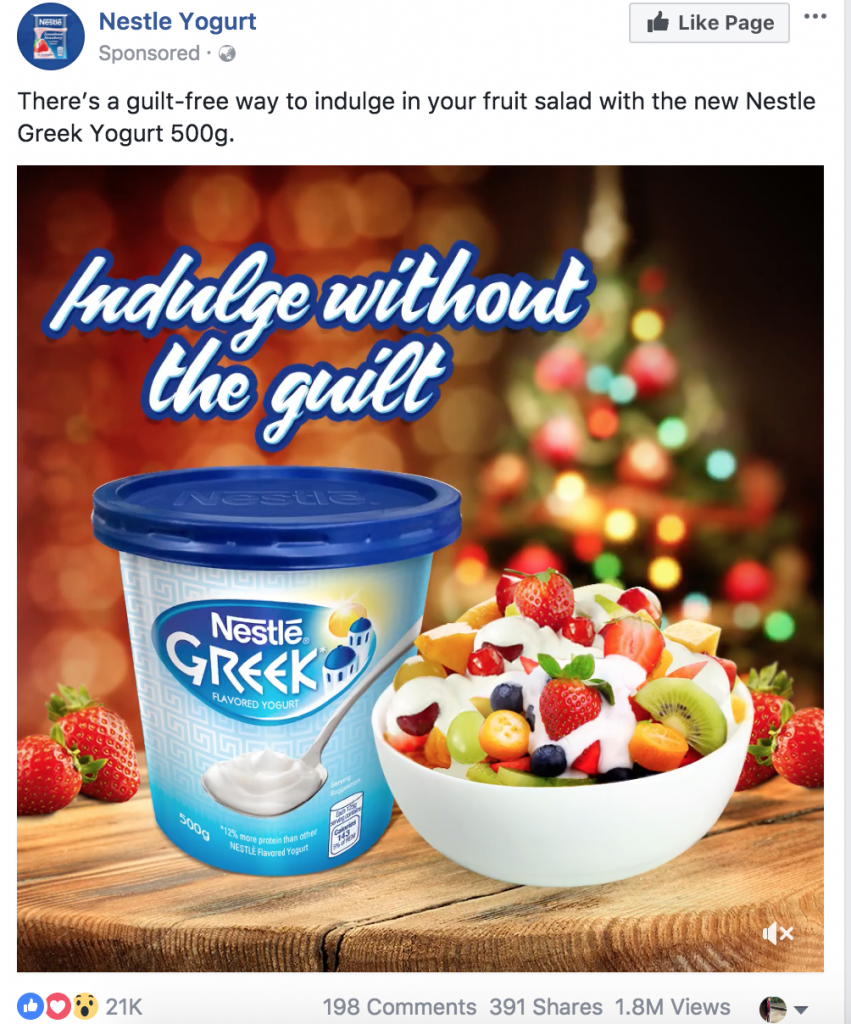 Sephora Philippines used ‘Wishlist’ to promote their products. By definition, wishlist is an eCommerce feature where a potential customer list the products they want to buy in the future.

Sephora encourages their shoppers who aren’t ready to buy yet to make a future purchase, particularly for the upcoming holidays. 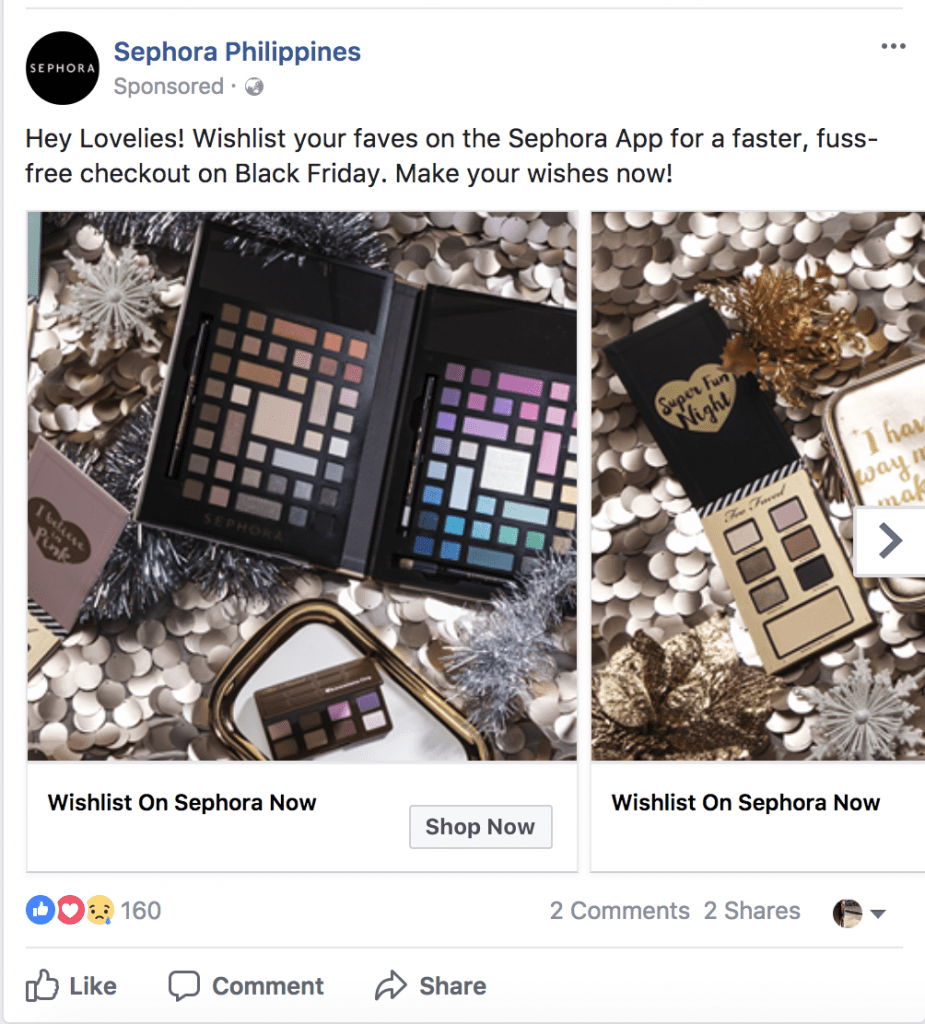 #8 Airasia – Christmas Is In The Air

AirAsia promotes their holiday airfare sale wherein as low as P866, travellers can book their flight.

They used Link Click Ad to redirect their customers to a landing page to book their flight. It also has a ‘Book Now’ button so it’ll be easier for them to know what to do after seeing the ad. 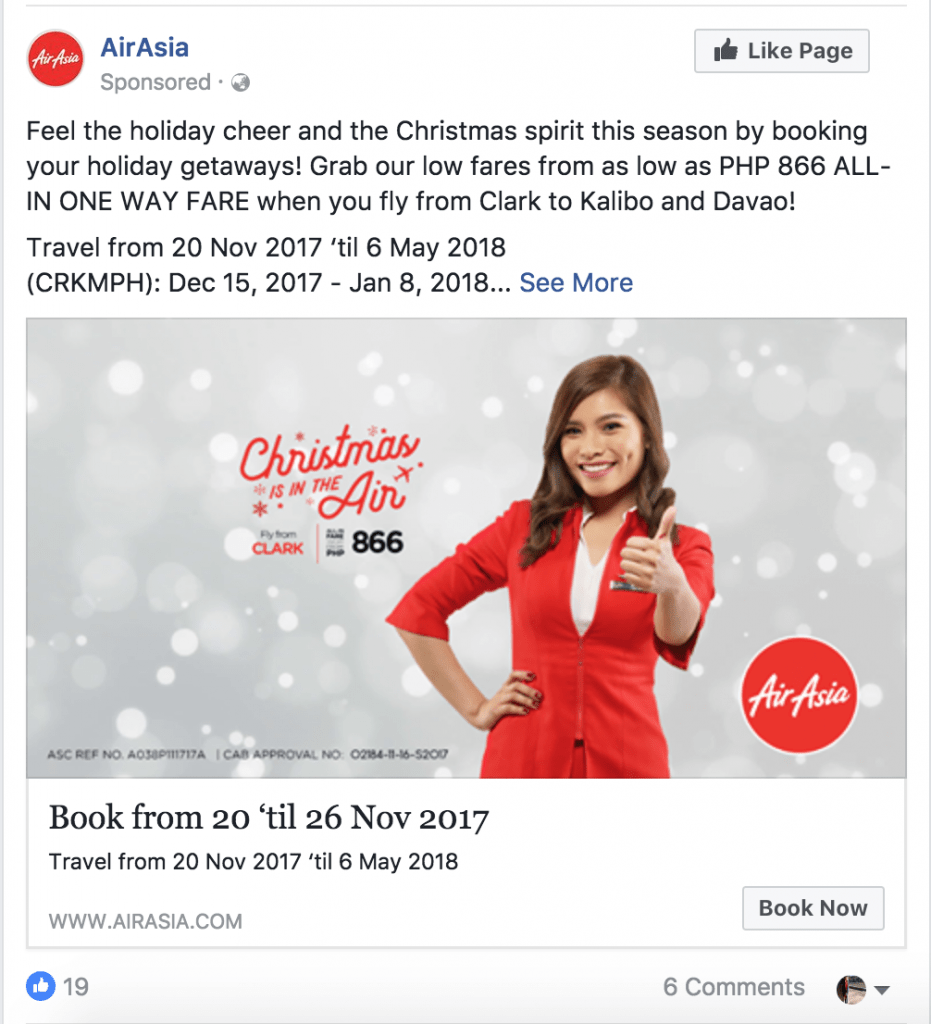 These are the factors why it’s a great example of a Facebook holiday campaign. 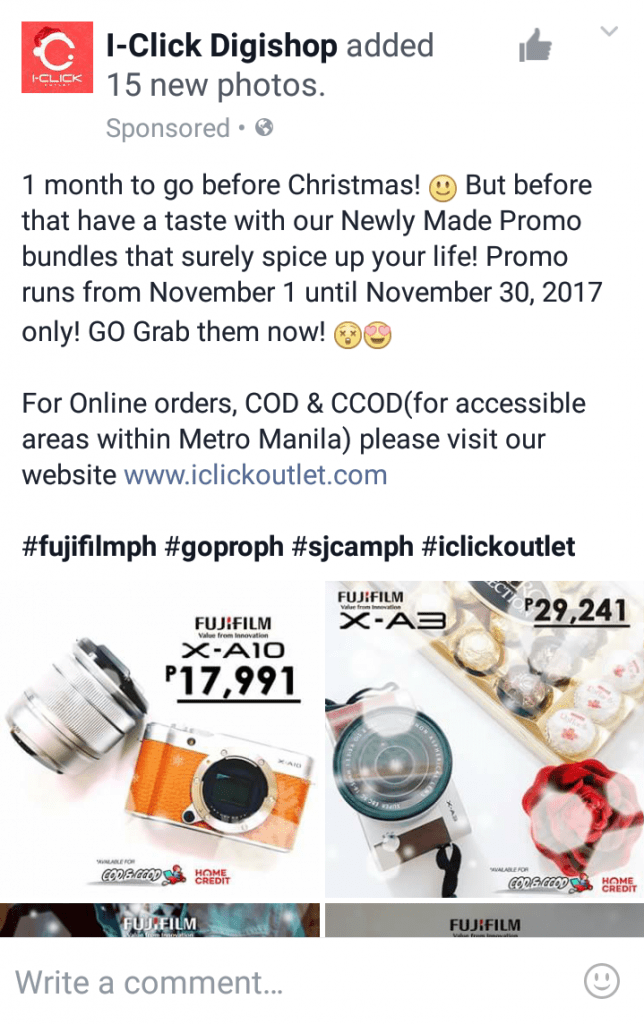 Our next successful holiday campaign is Klook’s year-end travel sale.

They utilize fun and engaging visuals that will surely catch people’s attention.

And the Facebook video ad below is an effective example of a holiday campaign.

By including a promo code within the ad’s description, their target market will likely click the ad. 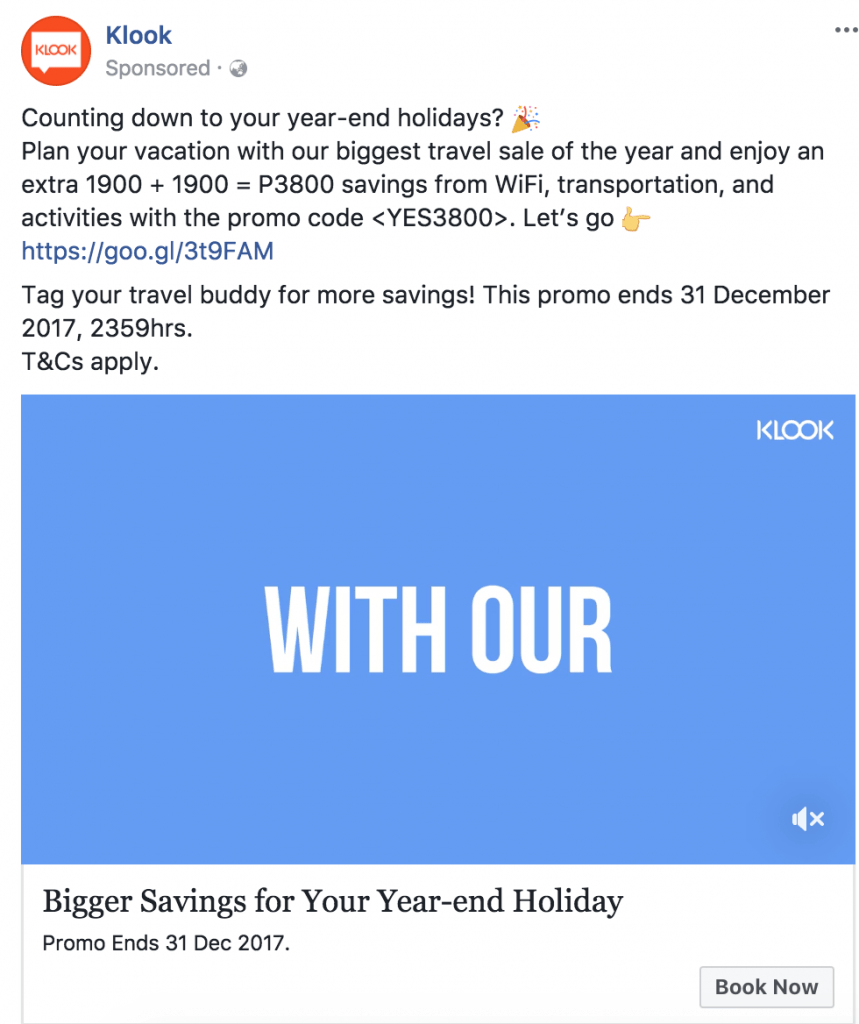 With 1.3K likes, 376 comments, and 117 shares and counting, you can really say that Spotify did a great job with their holiday campaign.

The one thing I noticed from their ad description is it’s short and sweet. They have a cool holiday image banner and also promoted their Premium subscription of P9 for 3 months. Who doesn’t want that sweet deal? 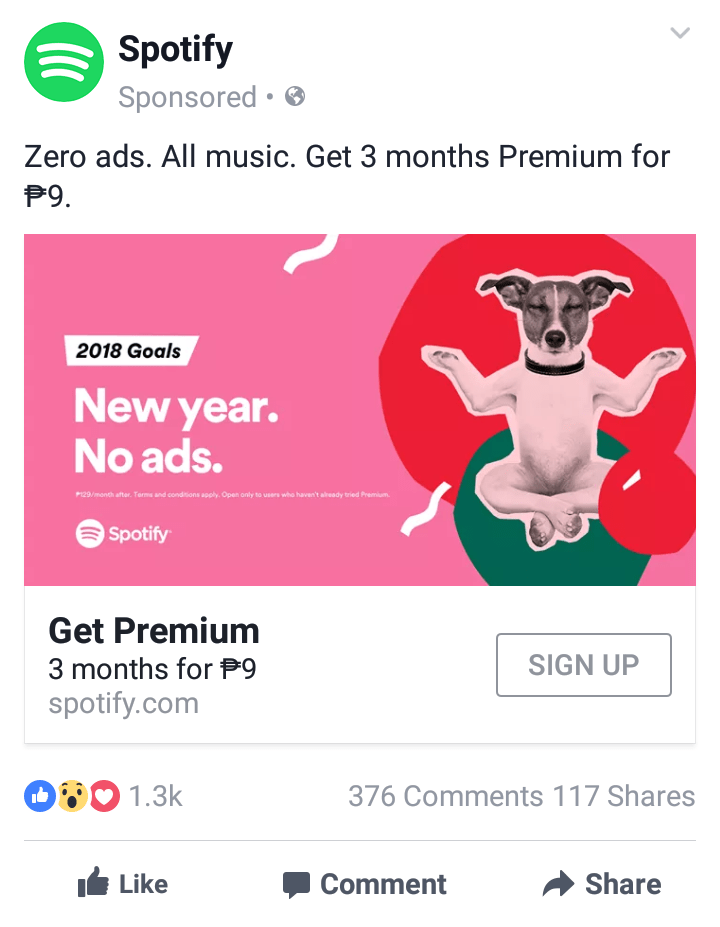 Banks in the Philippines are also hyped in marketing their bank cards particularly now that it’s getting close to the holidays.

UnionBank of the Philippines made the right choice to launch a holiday campaign just in time for shoppers.

They utilized the Facebook Lead type of ad where a user can enter his details to a form without leaving the platform. 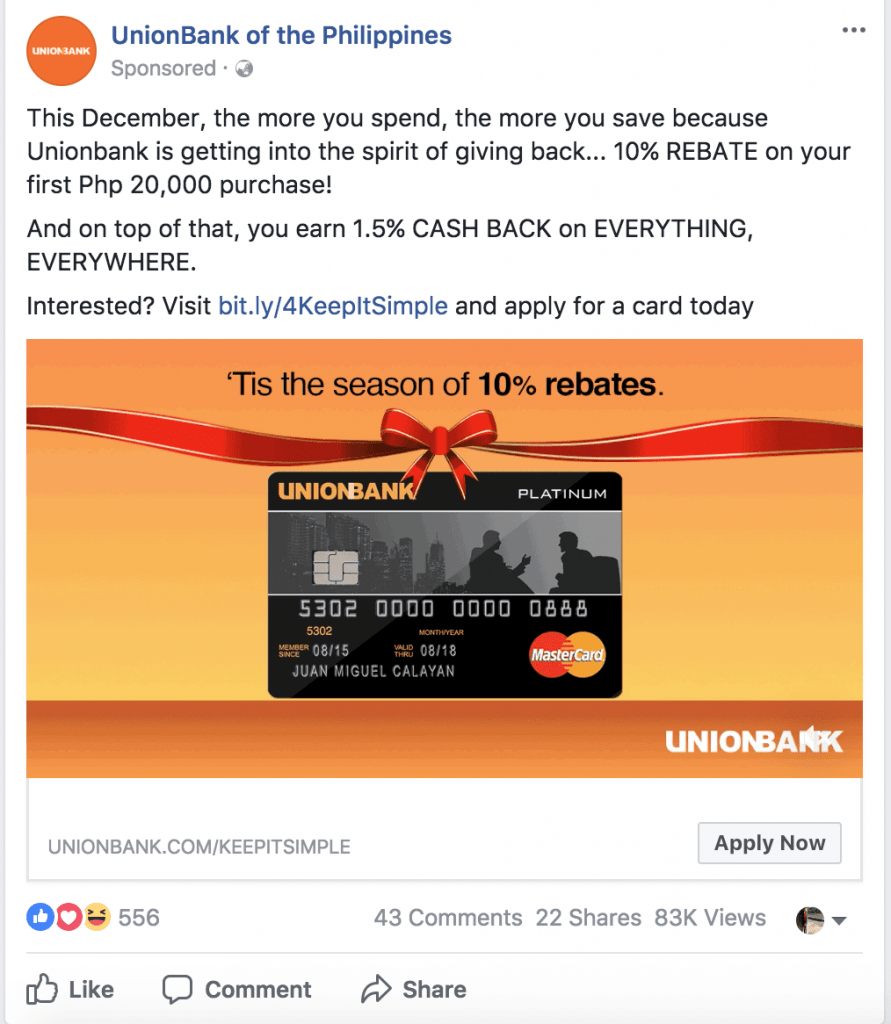 Their ad is perfect for those who want to travel internationally this season but doesn’t want to break the bank.

They placed an image banner of a festive Christmas village to captivate the attention of those who want to spend their holidays in these kinds of places. They also added the “Book Now” call-to-action button. 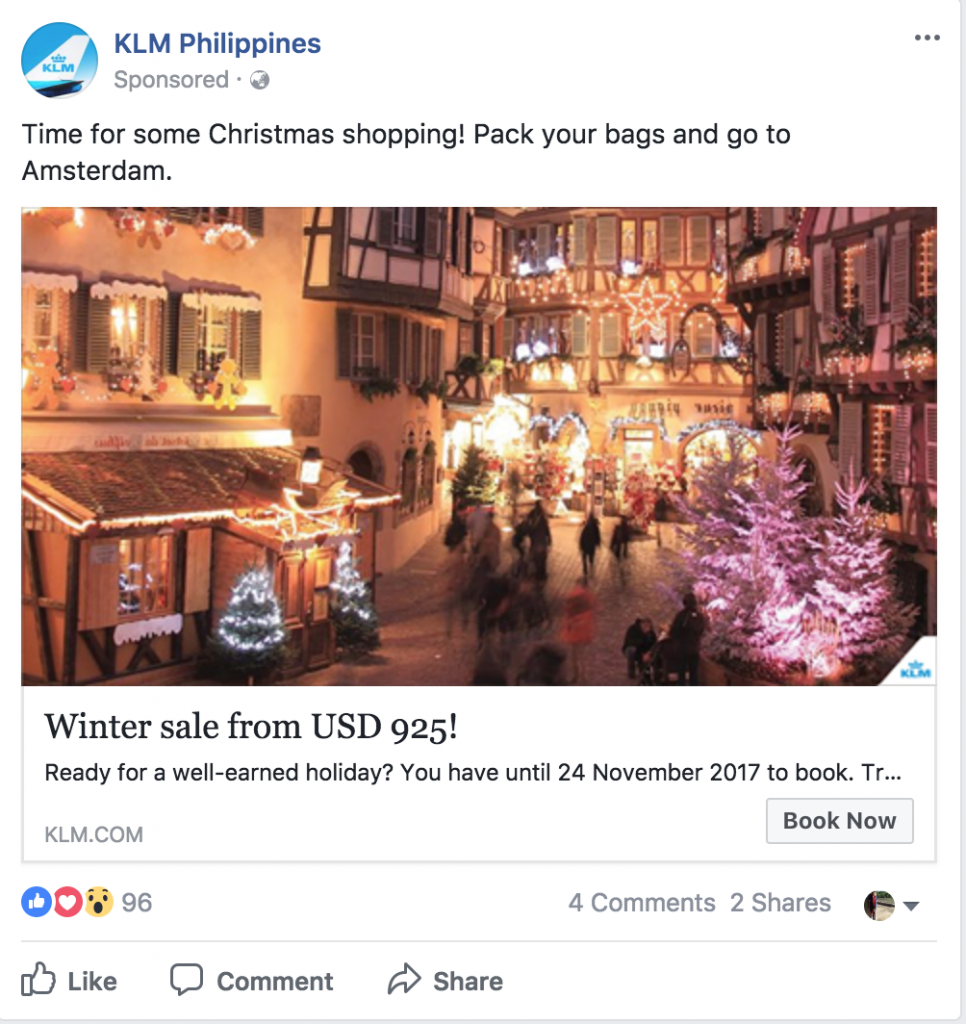 Here’s another perfect holiday campaign from a travel company you can’t miss.

Traveloka didn’t back down with the challenge of having many competitors with catchy campaigns this season.

In their campaign, they didn’t go with the traditional holiday ad with Christmas vibes effects. Instead, they went for a straight to the point travel inspired image. 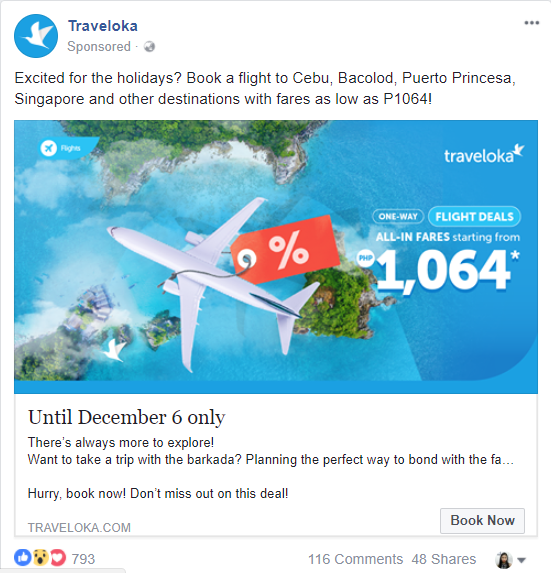 Whatever services or products you want to promote this season, there’s always a right Facebook Ad type that’ll surely fit your goal.

Always observe your surroundings. Think like your customers and know what they want to achieve this holiday season.

You can get creative as long as you want and come up with the coolest holiday campaigns that will catch your target market’s attention.